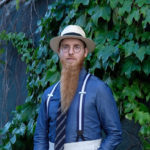 TIEFENBRUN Founder, Yosel Tiefenbrun, was raised in London and comes from a long line of tailors, fabric merchants and artists. The love of fine clothes, design and exquisite workmanship runs in his blood and has been his passion from a young age. Growing up, his studies took him to France, New York, Israel and then to Singapore to become a rabbi. In Singapore he also began to pursue his love of design and clothing, studying design at NAFA while interning at Harper’s Bazaar Magazine.

At the age of 21, Yosel moved to London to study at the Savile Row Academy, where he spent two years training in both cutting and tailoring. He was then chosen to apprentice under Master Tailor Andrew Ramroop of Maurice Sedwell, where he dealt with many high profile clients, celebrity sports players, award winning actors and international royalty.

Upon finishing his apprenticeship, Yosel moved back to Singapore to work as both a rabbi for the Jewish community and a tailor at Kevin Seah Bespoke. In his new role, he worked with many Asian and international clients, gaining a broader sartorial mindset for the various cultures, traditions and unique styles of Asia.

Following his dreams, Yosel moved to New York to open his own tailoring house, and at the age of 28, launched TIEFENBRUN in Williamsburg, New York.

On this episode, Yosel shares his one way ticket to New York City in the 1920s. He also reflects on his journey becoming a much sought after bespoke tailor, and advises how men can look and dress their best.

Yosel Tiefenbrun in the NY Times