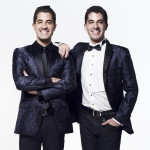 Singers, actors, writers, creators, improv comedians and advocates of arts in education – Will & Anthony Nunziata are the Brooklyn-born, classically trained singing and comedy brother duo who sing fresh takes of timeless songs from Pop, Adult contemporary music, Broadway, Italy and beyond. Hailed as “a nearly impossible pairing of talent, stage presence and charisma,” Will & Anthony continue to win critical and popular acclaim for their concert performances throughout the United States and around the world.

Will & Anthony Nunziata will be making their Carnegie Hall debut as the headlining artists alongside Broadway stars and recordings artists Liz & Ann Hampton Callaway with the New York Pops for their annual Holiday concerts on December 16 & 17, 2016.

Their “Carnegie Hall Concert Tour” will be presented in concert venues throughout 2016-2017.

From Singapore to San Francisco, Will & Anthony have created and performed tailored private concerts for countless corporate, private and Gala events all around the world. They have been featured recently on NPR, The Entertainment Weekly Sirius Radio show, The Rachael Ray Show, NBC’s The Columbus Day Parade and on ABC’s Good Morning America. In the fashion world, the brothers have modeled and been styled by Carmen Marc Valvo, Hermes U.S. and Hermes Toronto, Elie Tahari, b Michael America, and Nick Graham. Will & Anthony trained in improv comedy with the Upright Citizens Brigade in New York City.

Their proudest accomplishment is the creation of their Arts in Education Outreach Initiative and Master Class Workshops where they visit schools and students providing education and inspiration in supporting the arts as a significant component of young peoples’ lives. Through their workshops, Will & Anthony provide acting and vocal technique, life lessons of building a strong work ethic and personal brand, and the confidence to never give up on your passions.

Born in Brooklyn, the brothers, along with their younger sister Annie, were raised just north of New York City in Pelham Manor, NY. Music continues to constantly play in the home of their parents, Fran & Joe. Sinatra, Ella, Sammy Davis, Jr., Streisand, Dean Martin, Pavarotti, Billy Joel, Gospel – this was the soundtrack of Will & Anthony’s childhood. Today, their musical mission is to keep “America’s classical music” feeling fresh and new.