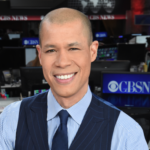 Vladimir Duthiers is a CBS News correspondent based in New York. He became a correspondent for CBSN, the 24/7 digital streaming network from CBS News, at its launch in November 2014.

Since joining CBS News in 2014, the Peabody Award and Emmy Award-winning journalist has covered a wide-range of breaking and feature stories. He spent a month covering the protests against police in the aftermath of a white police officer shooting an unarmed African-American man in Ferguson, Missouri and spent several weeks reporting on the police manhunt for Eric Matthew Frein, who allegedly killed a Pennsylvania State Police officer. He’s explored how the New Jersey shore rebounded after Superstorm Sandy, flown with the Navy’s Blue Angels, profiled NBA star Russell Westbrook, looked at the high-end jets of the mega-wealthy, including a visit with Donald Trump, and has interviewed President Bill Clinton and JPMorgan Chase CEO Jamie Dimon.

His work has been featured on CBS THIS MORNING, the CBS EVENING NEWS, CBS SUNDAY MORNING, and all CBS News platforms.

Before CBS News, Duthiers was an international correspondent at CNN, based in Lagos, Nigeria. His work there was honored with a Peabody Award for his reporting on the more than 200 girls kidnapped from their school in Northeastern Nigeria by the Islamist terror group Boko Haram. During his assignment in Nigeria, Duthiers reported extensively on the terrorist activities of Boko Haram which has been responsible for killing thousands of Nigerians since 2009. While in the region, Duthiers covered the ongoing military intervention in Mali, the terrorist attack on the Amenas gas plant in Algeria, the trial and sentencing of the former Liberian warlord Charles Taylor at the ICC in Sierra Leone, the crash of Dana Air Flight 992, and President Barack Obama’s visit to Senegal. He also reported from the Middle East on the Israeli-Palestinian crisis, from the streets of Bangkok during Thailand’s political turmoil and the birth of the royal baby Prince George in July 2013.

Duthiers has reported on the plight of trafficked children in Haiti and investigated the American missionary Doug Perlitz, who was accused of sexually abusing Haitian street orphans under his care. In 2011, he interviewed Haitian President Michel Martelly, pressing him on his country’s efforts to crack down on child trafficking.

He began his career at CNN in 2009 as a production assistant on the news program “Amanpour” before going on to serve as an associate producer for “Anderson Cooper 360°.” He was among the first journalists to arrive in Haiti to cover the 2010 earthquake and was part of the team that won two Emmy Awards for their coverage.

Prior to his career in journalism, Duthiers spent 18 years in the investment management industry, most recently as a managing director at an investment company, where he led global investment initiatives for clients based in 21 countries.

Duthiers graduated from the University of Rhode Island with a B.A. in political science and from Columbia University with a M.S. in journalism. He is fluent in French and Haitian Creole and is learning Mandarin Chinese.