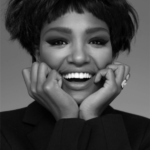 Titi Aynaw is a top Israeli model, former Miss Israel, television personality, Israel advocate and community leader. In 2013 she became the first Israeli-Ethiopian to win the Miss Israel title, opening the door for other Ethiopian models and causing advertisers to reassess their attitudes towards black models. She had never modeled previously and was unknowingly entered into the beauty competition by a high school friend. The win brought pride to the Ethiopian community and she is considered one of their leading role-models and spokespeople.

During his first Presidential visit to Israel in 2013, Barack Obama personally invited her to attend a state dinner at President Shimon Peres’ residence. Titi represented Israel in the Miss Universe contest in Moscow that year placing 17th overall. In addition, she traveled extensively to share her extraordinary life story with both Jewish, Gentile and African-American audiences.

Titi has a successful modeling career working on leading campaigns in Israel, Europe and the United States. In 2016 she spent two months on an island in Honduras competing for the Israeli version of Survivor where she placed second.

Born in Gondar province of Ethiopia, Titi always dreamed of moving to Israel. Her father died when she was a toddler, and when she was 12 her mother died as well after a long illness. Titi and her brother moved to Israel soon after and lived with their grandparents in Netanya. She studied at a high school for religious girls near Haifa and was elected President of the student council there. She recently founded and helps fund the “Titi Project” which provides extracurricular activities and enrichment to 66 Ethiopian kids from disadvantaged backgrounds in Netanya. She hopes to expand the project and help give other kids educational opportunities that she lacked growing-up.

Titi Aynaw served in the Israel Defense Forces as Company Commander with the rank of Lieutenant. After completing officer’s training she joined the Military Police and had up to 300 men and women under her command. At time of writing, Titi is in New York City working on her modeling career, having taken a leave of absence from the IDC University in Hertziliya where she studies international relations.