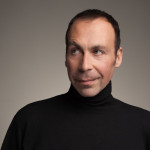 Taylor Negron is a veteran and much celebrated versatile performer. He made his film debut in 1982 as a love-struck, pill-popping, dancing intern in “Young Doctors in Love,” and as the forever memorable Mr. Pizza Guy who delivers Sean Penn a pizza in “Fast Times at Ridgemont High.” He has starred in an HBO special and made appearances on the Tonight Show.

Taylor Negron achieved critical acclaim at the Edinburgh Comedy Festival with “The Unbearable Lightness of Being Taylor Negron –.” Directed by opera director David Schweitzer, “Unbearable Lightness,” also ran in the 2009 Best of New York Solo Festival at the SoHo Playhouse and at the Barrow Street Theater. He directed the original New York Stage Musical production of “Who Loves You, Baby” exploring the life of the late, self-proclaimed macho man “Telly” Savalas. The production played to sold out audiences at Huron Club in the SoHo Playhouse and ran for more than 2 years