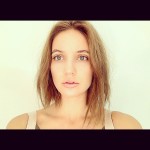 Born in Odessa, Ukraine songstress Sveta Bout spent her early years in the Soviet Union until her parents moved her to Long Island, New York, armed with only a few words of English and a myriad of strange Eastern European influences, which earned her a reputation in school as an outsider.

The young singer struggled to identify with both her American surroundings and her Eastern European heritage, but found through music she could incorporate the big, bright pop vocals of her favorite American singers with the percussive performance and eclectic instruments of her cultural roots.

A graduate of the Berklee College of Music in Boston, Sveta Bout now resides in New York City where she regularly plays sold out shows in famed Lower East Side venues. Two EP’s now under her belt, audiences have heard her intimate lyrics about love, heartbreak and revenge, paired with intricate melodies written by the singer herself. Her current set list from her second EP, “One Big Scandal”, reveals a sexier, edgier side of the young chanteuse who is known for her gut-wrenching, pitch-perfect vocals and alluring stage presence.

From this creative singer-songwriter, audiences can expect the drama of a stage performance, the intimacy of personal confession and musical influences ranging from the bluesy 1920’s to big brass bands of the ’40‘s, mixed with rocking guitars, Russian balalaikas and orchestral violins.