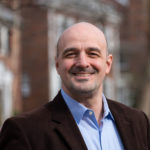 Shamil Idriss is the Chief Executive Officer of Search for Common Ground, the world’s largest organization dedicated to peace building.

As CEO, and in previous roles as President, Chief Operating Officer, and Burundi Country Director, Shamil has led Search’s efforts to end violent conflict in more than 35 countries, including conflict zones in the Middle East and Africa.

Starting in 2005, Shamil served as the Deputy Director of the United Nations Alliance for Civilizations, supporting political and religious leaders in improving relations between Western and Muslim-majority countries.

A pioneer in cross-cultural media technologies, Shamil worked from 2008 to 2014 as the CEO of Soliya, a nonprofit at the intersection of technology, peace building, and global education.

Shamil Idriss graduated from Swarthmore College with degrees in Economics and Philosophy.

On this episode, Shamil shares his one way ticket to meet New Zealand Prime Minister, Jacinda Ardern. Plus, he highlights the phenomenal work being done by Search for Common Ground around the globe.