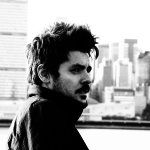 Sebastien Leon is a New York-based French musician and installation artist. An active part of the downtown art scene for the past twelve years, Sebastien has been conceiving a wide array of multimedia installations for which he directs design, music, environment and performance concepts.

In 1997, Sebastien received an MBA from Bocconi University in Milan, Italy and began his career as a marketing executive for Armani in Madrid and for Chanel in New York. Responding to his creative drive, he established The Point, a project space showcasing multimedia installations, which gradually morphed into his own curating and design practice, Formavision, eventually becoming Studio Sebastien Leon.

Sebastien started his musical explorations in 2008 as he was commissioned by Bono’s fashion label Edun to create a sound installation in collaboration with spoken-word artist Saul Williams and musician Kyle Fischer of Rainer Maria. Shortly afterwards, Sebastien and Kyle partnered with the Alan Lomax Foundation on a multi-channel sound installation called MMIX, for which they created a twelve-hour meditative music piece mixing their own music with some of Alan Lomax’s field recordings.

He just finished touring museums around the world with an organ-inspired installation composed of two thousand pipes commissioned by Swiss watchmaker Audemars Piguet. Currently, Sebastien is finishing Golden Horn, a permanent outdoor brass sculpture climbing a thirty-five-story tower in Istanbul which plays the sounds of its architecture.