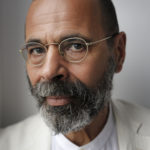 Sabato Russo was born and raised in the town of Foggia, in southern Italy’s Puglia region.

After studying architecture in Florence and Milan he started his career as an international fashion model.

More than anywhere, Japan fascinated Sabato with its history, culture and sensibility. He soon realized there that fashion was his main passion and started a collaboration as the assistant designer to Issey Miyake.

After gaining experience, he moved to New York where he began very prestigious collaborations with local and international brands, including Barneys, Kashiyama, G. Ferre and Fendi.

His last project’s success, Sartorial Monk, has now been transformed into the self-titled brand, Sabato Russo, bringing forward a minimal approach as a way to convey life’s simplicity in clothes.

Sabato appears as was one of the memorable contestants on the first season of the Amazon Prime hit series “Making the Cut” with hosts Tim Gunn and Heidi Klum.

Tim Gunn’s Interview on The One Way Ticket Show