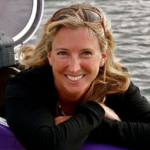 Best known as the first (and so far only) woman to row solo across the world’s “Big Three” oceans – the Atlantic, Pacific, and Indian – Rosalind Roz Savage inspires us to think again about what is possible, and encourages us to step up fully into the potential of our highest selves.

Roz Savage has authored three books: “Rowing The Atlantic: Lessons Learned on the Open Ocean”, “Stop Drifting, Start Rowing” and “The Gifts of Solitude: A Short Guide to Surviving and Thriving in Isolation”.