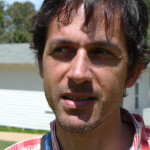 Travel writer and videographer Robert Reid has written about a far-range of travel destinations and topics for outlets including The New York Times, Wall Street Journal, ESPN.com and CNN.com, and has talked travel trends on shows like the Today Show and CNN Headline News.

While at Lonely Planet, Robert Reid authored two dozens guidebooks, including the Trans-Siberian Railway, Burma, Colombia and USA. He touts the next great travel trend to be “you travel,” where as individuals we probe our own interests, often once-faded ones from childhood, to approach as travel memes. While working on the 76-Second Travel Show, he tested the notion out with videos on using a Monopoly board as a guidebook to Atlantic City, Billy Joel lyrics for Long Island, and trying out in Mountie boot camp in Saskatchewan.