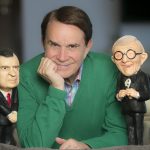 Infamous for his skewering of political figures, Little has charmed, amused, intrigued and entertained politicians from here to his native Canada.

He entertained at both of Reagan’s presidential inaugurations and got to know the Reagans very well during that time. President Reagan used to tell Little, “You do me better than I do.”

Apart from his impressions, Little is also an artist. He started sketching when he was young, drawing his family and friends. To date, he has drawn around 100 pictures of all the celebrities and politicians he imitates, and portrays several of these life-like charcoal sketches in his shows.

His recently released book, “Little by Little: People I’ve Known and Been” is now available.

These days, Little can be seen performing at the Laugh Factory at the Tropicana in Las Vegas.

From August 6th through September 4th, 2021, Little will be starring in his New York Theatrical Debut in George Bugatti’s play “Trial on the Potomac – The Impeachment of Richard Nixon”, based on the book “The Real Watergate Scandal,” by Geoff Shepard at the Theatre at St. Clement’s.

Little by Little: People I’ve Known and Been