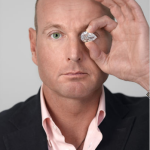 Prince Dimitrije “Dimitri” Karađorđević was born on 18 June 1958 in Boulogne-Billancourt, France.  Also known as Dimitri Karageorgevich, or Dimitri Karađorđević, he is the Founder, President and Creative Director of the jewelry firm bearing his name, “Prince Dimitri Company”.

Prince Dimitri was raised in Versailles, and attended boarding schools in France and Switzerland, before graduating from the University of Paris with a degree in Business Law. He then moved to New York City in 1983.

Originally pursuing a career on Wall Street, he decided to move into the field of jewelry. He was offered a position in Sotheby’s jewelry department, eventually rising to Senior Vice President. During his 15 years at Sotheby’s, he also became an appraiser and studied gemology.

In 1999, Prince Dimitri began designing jewelry, with a collection of gemstone cufflinks that was sold at Bergdorf Goodman and Saks Fifth Avenue. He also designed a line of women’s jewelry for Barneys New York and Neiman Marcus. In 2002, he moved to the Phillips de Pury & Luxembourg  auction house to head their jewelry department. In 2007, he and business partner Todd Morley founded the Prince Dimitri Company. His jewelry has also been sold at auction by Christie’s.

Prince Dimitri was named to the International Best Dressed List’s Hall of Fame in 1994.

His maternal grandmother was Princess Marie Jose of Belgium, who’s after was Albert I, King of the Belgians.   His paternal grandmother was Princess Olga of Greece & Denmark (sister of Princess Marina, Duchess of Kent).  His paternal great-grandfather was Prince Nicholas of Greece & Denmark, an avid oil painter and son of George I (1845–1913), King of the Hellenes. His paternal great-great grandfather was the Grand Duke Vladimir of Russia,  patron of the avant-garde, who spurred the creation of the Ballets Russes. From here, Prince Dimitri’s lineage of creativity can be followed, as can his curiosity and love for fine gems and jewelry. It was his paternal grandmother who related first-hand the magnificence of the jewelry collection of her mother and grandmothers. His great-grandmother Grand Duchess Elena Vladimirovna of Russia had inherited all of the diamonds belonging to her mother, Grand Duchess Maria Pavlovna of Russia,  a collection renowned the world over for its lavish, exquisite breadth.

Prince Dimitri is also a first cousin of Emanuele Filiberto, Prince of Venice, the son and heir of the pretender to the throne of Italy, and also first cousin of the actress Catherine Oxenberg.  Through Prince Dimitri’s parents he is related to every royal family in Europe, making him over 1000th in the line of succession to the British throne.

“I’m very involved with something called ‘Mindfulness’, the ability to live in the here and now, and not to worry about the past that doesn’t exist anymore, or a future that doesn’t exist yet – but to focus completely in the present”.

“Any creator puts his own energy into his work”.

“My philosophy is that wherever I go in life, I always behave like a grateful guest”.

French Poet & Author, Christian Bobin:  “Intelligence is the solitary effort, to extract from the chaos of your own life, the handful of light, sufficient enough to enlighten the others, who just like you, are lost in darkness.”

“I would like to meet especially Catherine of Medici who was I think the single greatest Head of State France ever had, in the sense that she unified the country.”  “She invented the concept of political marketing”.

“Catherine the Great I’d love to meet also.  Because she remade Russia…She brought Russia from the Middle Ages to the 18th Century”.

“I believe in reincarnation…They say that the purpose of reincarnation is to bring souls back to learn every aspect of life”.

Many Lives, Many Masters by Brian L. Weiss, M.D.

“I think one of the saddest things in life is not to have any passion.”

“I was very lucky that I was given many passions.  I’m interested by everything.”

“Beauty if my passion, really, with a soft spot for gems.”