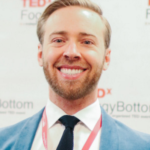 Nick Gray is the Founder and CEO of Museum Hack, a company of educators and actors who give renegade tours at some of the best museums in the world. Gray is a former techie. He doesn’t come from an arts background, and he claims to “hate” most museums.

Museum Hack has been featured in publications such at Forbes, The Wall Street Journal, and Newsweek.