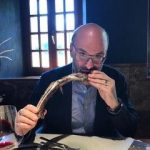 Mitchell Davis is the founder of the consultancy Kitchen Sense, LLC, a laboratory for creative food content and innovative approaches to food-system issues. Throughout his long career in the food world, Mitchell has been “a central figure behind the scenes helping to start, analyze and oversee trends, developing the next generation of talent,” according to chef and media personality David Chang.

While at the James Beard Foundation for almost 27 years, most recently as Chief Strategy Officer, Mitchell created and oversaw many of the Foundation’s most impactful initiatives, including the annual JBF Food Summit, a national dialogue of thought leaders on sustainability and public health, the JBF Chefs Boot Camp for Policy and Change, an advocacy training program for culinary professionals, and the JBF Women’s Entrepreneurial Leadership program, intended to correct the gender imbalance in leadership in the restaurant industry.

Working with artist Mattia Casalegno and the team at Unapologetic Foods, Mitchell co-produced Aeorobanquets RMX, the world’s first fully immersive, mixed-reality dining experience that was installed in the James Beard House for a sold-out, three-month run in 2019. The Washington Post called Aerobanquets “the future of restaurants.” In 2013, Mitchell led the team that was selected by the U.S. Department of State to create the USA Pavilion at Expo Milano 2015—the first world’s fair since 1862 focusing on food—for which he received visits and commendations from U.S. Secretary of State John Kerry, U.S. Secretary of Agriculture Tom Vilsack and First Lady Michelle Obama.

Mitchell has a Ph.D. in Food Studies from New York University. He has been a curriculum advisor to and/or guest lecturer at the Florence University for the Arts and their Apicius International School of Hospitality, the Cornell School of Hotel Administration, the Rosen College of Hospitality Management, the Institute for Culinary Education, The French Culinary Institute, and the Italian Culinary Institute for Foreigners.

He frequently writes about food and restaurants, and has a weekly Substack newsletter on home-cooking. For more than a decade he held a chair on the Academy of the London-based World’s 50 Best Restaurants. He has written several cookbooks, including the ground-breaking electronic book My Provence (Alta Editions) with Michelin three-star chef Laurent Gras, which won the IACP’s “Judges’ Choice” award in 2013, and Kitchen Sense (Clarkson Potter, 2006).

In 2013, The Forward selected Mitchell as one of the 50 most influential Jews under 50 in America. In 2017 epicurious.com included Mitchell on their list of the “100 Greatest Home Cooks of All Time.” For his contributions to the ever-changing food landscape and his tenure as host of more than 125 episodes of the popular podcast Taste Matters, in 2019 Heritage Radio Network inducted Davis into their Hall of Fame.

Most recently, Mitchell began hosting the “What’s Burning” podcast, a podcast of the Galilee Culinary Institute.

On this episode, Mitchell shares his one way ticket to the famed 3 star Michelin restaurant, La Pyramide, in Vienne France, sometime in the late 1940s or early 1950s. He also offers his list of “10 Memorable Meals” to mark our show’s 10th anniversary this year. Plus, Mitchell showcases the “What’s Burning” podcast and its stellar line-up of guests.

Mitchell’s List of 10 Memorable Meals (to mark our show’s 10th anniversary this year):