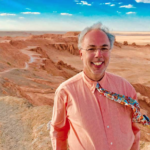 Perhaps it was that Soviet connection that led Michel Behar to name his company Stakhanovets, the Russian tongue-in-cheek word for an ambitious worker, inspired by the exemplary Soviet coal miner, Stakhanov.