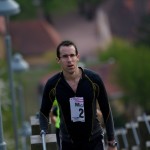 In 2012, Michael Karlin was ranked # 50 in the world among men in towerrunning and earned USATF Masters All-American status in the 5K, 8K, 10K, & 10-mile distances.

Also in 2012, Michael Karlin became the first and only American to ever finish the German Everest Stair Challenge, where the goal is to climb the equivalent distance from Sea Level to the Summit of Mt. Everest and back down in under 24 hours. Michael completed the challenge in 23 hours, 20 minutes, and 45 seconds.

Away from the sport, Michael works in Finance, trading in U.S. equities markets, and is a Director of a small Maryland-based Biotechnology Company in addition to owning a small business involving the Internet and World Wide Web domain names. Michael is also a CPA and CFP. He holds a JD from the University of Pennsylvania, and an MBA and a BS in Accounting from George Washington University.

Michael lives in both Bethesda, Maryland and New York City.