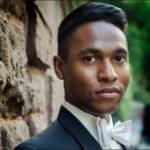 Malcolm J. Merriweather professional affiliations include membership in Pi Kappa Lambda, the American Choral Directors Association, and Chorus America. Merriweather sits on the Board of Directors of the New York Choral Consortium.