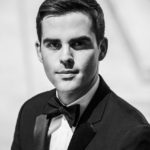 Luke Frazier, a rapidly rising star in the pops world, has proven himself as both an innately musical conductor and a sensitive pianist. His commitment to re-envisioning pops programming has quickly established him as a dynamic force across the music community. Frazier has demonstrated his versatility and range by conducting in venues both grand and intimate, from Lincoln Center to Carnegie Hall, the Kennedy Center to the Rainbow Room. Pulitzer Prize-winning composer Marvin Hamlisch put it best, calling Frazier “so talented, and sensitive to every nuance.”

His commitment to the American Songbook is also evident through his involvement on the Board of the Great American Songbook Foundation. In demand as a clinician, adjudicator, and speaker, Luke recently addressed the National Symphony Orchestra’s “Summer Music Institute” students. He appeared as the Keynote Speaker for the National Society of Arts and Letters (NSAL) Award for Excellence in the Arts at the Kennedy Center and also addressed VSA Arts, an international organization for artists with disabilities. Mr. Frazier serves as the Artist in Residence with the DC Youth Orchestra and most recently presented a series of concerts celebrating Ella Fitzgerald’s birth.