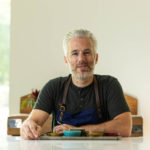 Lior Lev Sercarz is the chef, spice blender and owner of La Boîte, a biscuits and spice shop in New York, which has been featured in a variety of publications including The New York Times, Vogue, InStyle, Every Day with Rachael Ray, Food & Wine Magazine and the SAVEUR 100.

In 2002, Lior brought his newfound understanding of spice blending to New York, where he had the honor of working with chef Daniel Boulud at his flagship restaurant Daniel as a sous chef and catering chef. He left Daniel in 2008 to start La Boîte, originally making and selling a line of French biscuits as well as experimenting with spices. In 2011, deepening his spice knowledge, he opened La Boîte Biscuits & Spices, an art gallery and spice shop in New York City’s Hell’s Kitchen on 11th Avenue and 51st Street.

Up next for Lior includes the expansion of La Boîte’s presence in Manhattan with a new wholesale headquarters and test kitchen on West 46th Street. He also serves as the culinary director of the future Jewish National Fund-USA Galilee Culinary Institute in Israel’s Upper Eastern Galilee, set to open in 2021.