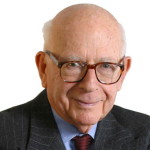 In 1967, in an address at MIT, Mr. Lester Wunderman identified, named and defined Direct Marketing, and for more than four decades he led the theoretical and practical growth of the industry.

Mr. Lester Wunderman’s, ‘Being Direct’, was first published by Random House in January 1997 and an updated and revised edition, which includes the first-ever consumer Bill of Rights and his views on the Internet, was subsequently published and distributed by the Direct Marketing Association in 2004. It has been translated into many languages, including Mandarin and Japanese. An earlier book, ‘Frontiers of Direct Marketing’, was published in 1981, and his speeches and articles have appeared in publications worldwide.