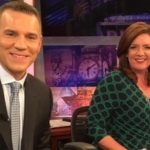 Larry Potash joined WGN-TV News in August 1994 and has been anchoring WGN Morning News since 1995, just one year after its inception.

Larry does in-depth stories about history, science, religion and more. In 1996, he travelled to Asia to do a multi-part series on the culture of Hong Kong and the transition to Chinese sovereignty. His daily feature, “Larry’s World,” takes a look at the offbeat, fun and sometimes lesser known facts behind various pop culture phenomena and television news-making itself.

Larry has been recognized for his achievements in broadcasting. Four of his nine Emmy Awards have been for Best Anchor. The Illinois Broadcasters Association also honored Larry with nine Silver Dome awards for Best Anchor in Chicago.

Larry came to WGN-TV from KOTV-TV in Tulsa, Oklahoma, where he was a weekend anchor and political reporter. Prior to that, Larry worked at WFIE-TV in Evansville, Indiana, as a morning anchor. He also reported and anchored for KLMG-TV in Longview, Texas.

Larry received his Bachelor of Science in Mass Communications and Broadcast Journalism from Emerson College in Boston.

When WGN Morning News expanded to 4 hours in 2004, she became the solo anchor of the 5 am show. In 2004, Robin became the main anchor of WGN Morning News, from 5:30 am to 9 am. When the show expanded in 2013, she extended her duties again to cover the 6-10 am hours. In addition to anchoring, Robin enjoys reporting on stories unique to Chicago and the South Side.

Prior to joining WGN-TV, Robin worked at Shadow Broadcast Services in Chicago. During that time, she worked as a traffic, news and sports reporter for WLUP Radio’s Jonathon Brandmeier Show.

She also worked as a traffic reporter for CLTV News, and spent one year doing freelance work with ABC Sports.

Robin received a bachelor’s degree in broadcast journalism from the University of Illinois at Urbana-Champaign and is a proud Illini alumna. She is a lifelong Chicagoan, born and raised in South suburban Burbank, and has two daughters.