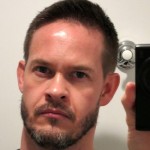 Most of Klaus Enrique’s career was spent as a freelance IT consultant before turning to photography, which he studied at Parsons and at the School of Visual Arts in New York City.