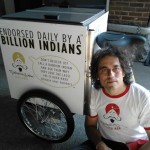 Born and raised in New Delhi, India, Karan Gera moved to New York City in 2002 to work in advertising.