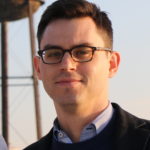 Josh Foer is the Co-Founder of “Atlas Obscura”. The book’s second edition is now available and is published by Workman Publishing.