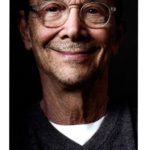 He was Ned Weeks in the Public Theatre’s original off-Broadway production of Larry Kramer’s seminal play, The Normal Heart, in 1986, and co-directed the Tony Award-winning Broadway premier in 2011.

Mr. Grey’s film credits include: Cabaret (Academy Award), Buffalo Bill and the Indians, Remo Williams: The Adventure Begins, Dancer In the Dark, The Seven Percent Solution and many more.

He is also an internationally exhibited photographer with four published books, Pictures I Had to Take (2003), Looking Hard at Unexamined Things (2006), 1.3 – Images From My Phone (2009), and The Billboard Papers (2013). Mr. Grey’s work is part of the permanent collection of The Whitney Museum of American Art. His memoir, Master of Ceremonies, was released in 2016 (Flatiron Press).

Joel Grey made his professional debut at the age of nine as Pud in the Cleveland Playhouse production of On Borrowed Time.