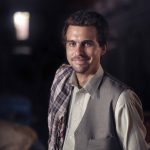 James Willcox is one of the founders of Untamed Borders, a travel and logistics company that offers bespoke trips and small group adventures to some of the world’s most interesting and inaccessible places. Specializing in cultural, trekking, marathon and skiing trips, Untamed Borders offer some of the most unique itineraries in the travel market today. Operating in the Middle East, East Africa and Central Asia, Untamed Borders takes over 250 guests a year to unusual and largely unvisited areas of the world. Traveling in small groups and using local guides, the Untamed Borders mission is to add positive benefit to the countries and communities they visit.

Some of James’ more notable achievements include pioneering ski tourism in Afghanistan and Iraq, organizing marathons in Afghanistan and Somaliland (the first mixed gender sporting events in the history of those respective countries) and more recently arranged the logistics for the next Michael Palin travel documentary in Iraq.

On this episode, James shares his one way ticket to 300 years in the future somewhere in the mountains. Plus, to mark our show’s 10th anniversary, James shares 10 destinations and travel experiences we should consider. They are:

James Willcox Talk at the Royal Geographical Society: Puntland: To the Lighthouse on the Tip of the Horn of Africa