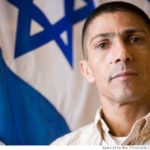 Ishmael Khaldi was born in Khawaled, a village near Haifa. He is the third of eleven children and lived in a Bedouin tent until the age of eight. He walked four miles (6 km) round trip to attend school and tended flocks of sheep. He said his family’s ties with its Jewish neighbors go back to the days of the early Zionist pioneers from Eastern Europe who settled in the Galilee region in the 1920s.

He initiated a project called “Hike and Learn with Bedouins in the Galilee” that has brought thousands of young Jews to Khawaled to learn about Bedouin culture and history. He said these encounters inspired him to become a diplomat.

Ishmael began working for the Israeli Foreign Ministry in 2004. Throughout his distinguished career, he served as Vice Consul at the Israeli Consulate in San Francisco, and was Councilor for Civil Society Affairs at the Israeli Embassy in London. Plus, Ishmael was a policy advisor to former Foreign Minister Avigdor Lieberman. He also served in posts in Ghana, Angola, Cameroon, Nigeria, Nepal, India and Miami.

In 2020, Ishmael was appointed Israel’s Ambassador to Eritrea.

A Shepherd’s Journey: The Story of Israel’s First Bedouin Diplomat