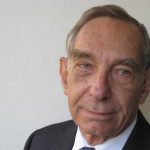 He moved from New York to Washington to open a bureau for a startup, Radio Press International, and to cover President John F. Kennedy as White House correspondent. Joining ABC News, his first major special event was Kennedy’s funeral.

Chapman was ABC’s Bureau Chief in Moscow and Tokyo; he also worked in the Saigon, Los Angeles and New York bureaus. He covered Richard Nixon’s first-ever presidential summit in the Soviet Union, interviewed Emperor Hirohito before a ground-breaking visit to the United States, and travelled with Pope John Paul II on trips to Asia and his native Poland. Other assignments took him to Taiwan and the Philippines, Egypt, Israel, and Lebanon, India and Pakistan, Germany and Australia. He returned to the U.S. to cover presidential conventions and campaigns and Capitol Hill.

Chapman later worked for Cable News Network as Washington correspondent for CNN Business News. He joined Bloomberg 18 years ago as television and radio correspondent and continued to cover Congressional hearings, including the 9/11 Commission and the financial crisis panel, meetings of regulatory agencies and the Federal Reserve, and Supreme Court arguments on Obamacare and same-sex marriage.

In academia, Chapman taught courses at the School of Foreign Service, Georgetown University, on the role of media in the context of a country’s history, politics, government, and business system. He continues lecturing to national, student and public audiences about media, economics and global affairs.