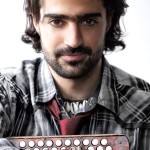 Uribe leads the high energy, must-see 16-piece Gregorio Uribe Big Band (GUBB) that blends funk and jazz with cumbia and chandé from his native Colombia. Credited by The Boston Globe with creating “an intoxicating variety” of music, Uribe has performed with Latin music luminaries including Ruben Blades, Carlos Vives and Arturo O’Farrill.

Uribe’s whirlwind travels began when he studied at the Berklee College of Music, where he received the Steve Gadd Zildjian Scholarship Award in 2007. He moved to New York City in 2008 and soon established himself firmly within the heart of the city’s music scene.

Uribe has performed extensively including at The Kennedy Center (Washington, D.C.), Blue Note Jazz Club (NYC), and the United Nations.

In 2012, Uribe was named by Colombia’s government one of the 100 Most Outstanding Colombians Living Abroad. The list included Shakira, Nobel Prize winner Gabriel García Márquez, and actress Sofia Vergara.

GUBB’s audiences are diverse, energetic, and wholeheartedly receptive of the Colombian and Latin rhythms. The band features a unique combination of New York’s top musicians from around the world, including Argentina, Canada, Mexico and the U.S.