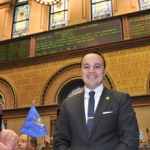 Francisco Moya worked for the Queens Health Network at Elmhurst Hospital, where he was the Associate Director of Business Development. In this role, helped develop three new community-based health clinics, including a cutting-edge wellness center for seniors and the first clinic in Queens solely dedicated to women’s health.