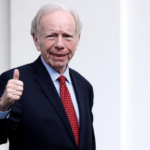 I’ve dipped into our show’s archive from over the last decade and bring you an interview I released on 15 September 2020, with former United States Senator, Joseph I. Lieberman.

On this episode, Senator Lieberman shares his one way ticket to the day after the corona virus pandemic ends. The Senator also covers his work on the bi-partisan commission on bio defense which he co-chairs with former Homeland Security Secretary, Tom Ridge; comments on the far left turn of the democratic party, and shares what he thinks the rest of the world should know about the United States today.