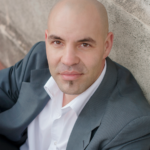 From growing up on a small island in The Maritimes (Canada) to traveling across North America to speak to audiences both small and large, Corey Poirier is an award-winning Keynote speaker (having presented to over 200,000 attendees and having shared the bill with Deepak Chopra, Stephen MR Covey, Television Personalities, and more).

A multiple-time TEDx and MoMonday’s Speaker, Corey is also the Host of the top rated “Conversations with PASSION” Radio Show. He has been featured in one-hour television specials on Eastlink TV and TeleTelevision and is a columnist with Entrepreneur Magazine, Progress Magazine and has over 900 articles in print. He has appeared on Global TV, CTV, CBC TV and Radio, and is one of the few leaders featured twice on the popular Entrepreneur on Fire show.

Corey Poirier has interviewed over 4,000 of the world’s top leaders in search of the traits that set them apart. He has also enjoyed successful corporate careers with Global 1000 company Konica Minolta, Fortune 500 companies Toshiba Corp., Hewlett Packard and SAP Software.

As someone who has performed stand-up comedy on more than 700 occasions, shared the bill with award-winning comics and musicians (This Hour’s Shaun Majumder, Tracey MacDonald, Irwin Barker and Mike Dixon), surfed the world class shores of Tofino, B.C., skydived in New Brunswick, co-hosted a comedy radio show for a year, performed at the famed Second City as part of The Great Canadian Laugh Off Competition, and had his 2014 album nominated as rock recording of the year, Corey’s entertaining war stories motivate, entertain and educate audiences wherever speaks.

Osgood on Speaking: How to Think on Your Feet Without Falling on Your Face