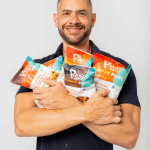 Dr. Juan Salinas is the founder and CEO of Perfect Life Nutrition Inc, the manufacturer of P-nuff Crunch, a peanut-based protein puff snack.

A native of Honduras and now a resident of New Jersey, he holds a Masters and Ph.D. in Food Science from Rutgers University, a Masters in Sports Nutrition from the International Olympic Committee, and is a Rutgers MBA candidate.

He started the company after spending over 20 years working as a snack innovator and product developer for several of the largest CPG food companies in the US. Combined with his passion for health and fitness, and experience as a professional natural bodybuilder and amateur endurance athlete, he is on a quest to create snacks that are not only delicious but also nutritious.

Dr. Juan Salinas was the 1st place winner of the 2018 Rutgers Business School Annual Business Plan Competition and was recently featured on ABC’s Shark Tank where he obtained investment from Mark Cuban. He has been a guest on numerous podcasts and featured on Telemundo, the TODAY SHOW, and FOX network TV.

On this episode, Dr. Juan Salinas shares his one way ticket, which he is on right now, moving from Honduras to the US to study and ultimately living the American dream. In our conversation he also highlights developing P-nuff Crunch, takes us behind the scenes of his Shark Tank appearance, offers the number one lesson he’s learned from Mark Cuban, and his own advice for budding entrepreneurs.

Plus, in our show’s on-going 10th anniversary series on a “one way ticket to optimal mental, physical and spiritual well-being”, Dr. Juan shares his daily routine of prayer, healthy eating and exercise.