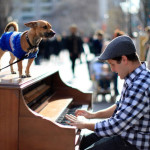 Dotan Negrin is a self-taught pianist who started playing piano at age 18 after being inspired by Miles Davis’ album “Kind of Blue”.

In fact, Dotan has been immersed in the arts since he was a child. Growing up in New York his parents, who hail from Greece and Israel, always exposed him to a wide variety of music, theater, and fine art.

In 2010, Dotan decided to start street performing in New York City by bringing his upright piano to city sidewalks and playing for passersby. He found such joy in bringing happiness to pedestrians that the following year, after honing his skills, he embarked on a journey across North America (together with his dog Brando) and has thus far played on the streets of more than 53 cities and in 8 National Parks.

Dotan Negrin continues to perform on the streets and will travel to exotic locales around the world with his upright piano (and Brando). He hopes to bring live music to people who don’t have access to it and to inspire people wherever they are to follow their dreams and to do something truly remarkable with their lives.

A 2008 graduate of the University of the Arts with a BFA in Acting, Dotan also attended The O’Neill: National Theater Institute in Connecticut.