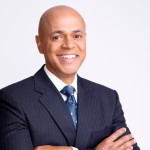 Emmy award-winner David Ushery is the co-anchor for the weekend editions of “News 4 New York” at 6 p.m. and 11 p.m. and is the host of “The Debrief with David Ushery.”

“The Debrief,” created by Ushery in 2009, has been nominated for an Emmy Award for three consecutive years. “Eight million stories in the naked city….give us just a few minutes to bring you up to speed on what New Yorkers are talking about” remains the opening lines of the show since its inception and launch. In 2010, a Debrief segment featuring a blog by New York City mothers launched the spin-off program, “Moms and the City and a Dad named David.” Ushery and the mothers examined issues from a parent’s point of view.

“The Debrief” is a half-hour broadcast that provides viewers a unique behind-the-scenes perspective of the news utilizing an unscripted conversational approach interviewing NBC 4 New York’s news reporters as they cover important stories in the viewing area. “The Debrief” airs on NBC 4 Sundays at 5:30 a.m. as well as on COZI TV.

Since 2003, Ushery has been an integral part of NBC 4 New York’s coverage of some of the most noteworthy events, including the devastation and aftermath of both Hurricane’s Irene and Sandy, the elementary school shooting in Newtown, Conn., the emergency landing of US Air Flight 1549 in the Hudson River and the 2008 and 2012 presidential elections. Ushery traveled to Rome to cover the resignation of Pope Benedict XVI and the 2013 papal conclave electing Pope Francis, the current Pope of the Catholic Church.

Ushery joined NBC 4 New York from WABC-TV, where during his ten year tenure he rose from general assignment reporter to full-time anchor of the early morning and noon broadcasts, as well as primary fill-in anchor for the evening newscasts.

Ushery was also noted for his work on the street. His reports include extensive, in-depth coverage of the shooting death of Amadou Diallo and the September 11 terrorist attacks. Ushery has reported extensively outside the tri-state area as well as abroad. He was sent to Houston for the space shuttle disaster, to Los Angeles for the O.J. Simpson trial, and to Utah to cover the disappearance of Elizabeth Smart. He traveled on multiple occasions to Haiti for a serious of reports on the island’s political and economic unrest; to Africa and Toronto for Pope John Paul II’s visits to those countries, and to South Africa to cover the United Nation’s conference on racism.

Prior to joining WABC, Ushery was the lead evening reporter for WFSB-TV in Hartford, Conn. He also reported for the Hartford Courant and the Los Angeles Times. When he was 11, Ushery was selected from a Connecticut-wide search to host the local edition of “Kidsworld,” a nationally syndicated television show. He hosted Kidsworld until he was 18.

Ushery, recognized for his commitment to NBC 4 New York’s viewing audience, is a sought after emcee and keynote speaker who participates in school and nonprofit events that raise funds for programs and services that benefit the community.

He is the recipient of numerous honors and awards that include: 2013 “Excellence in Journalism” award from the Public Relations Society of America; 2012 Emmy Award for Special Programming: Dead Sea Scrolls; 2011 McDonald’s Black Media Legends: Faces of Black History Award; the National Association of Black Journalists Award for his series of reports on children and violence. The Network Journal and Black Professionals Business Magazine named Ushery one of its “40 Under-Forty” for his journalistic accomplishments. The Israeli Consulate in New York City honored him for a series of comprehensive reports and for his commitment to the community. Ushery later covered a visiting political delegation in Jerusalem.

A graduate of the University of Connecticut, Ushery is married and has a son.