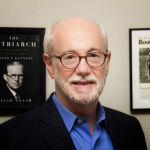 David Nasaw is the author of The Patriarch, selected by the New York Times as one of the 10 Best Books of the Year and a 2013 Pulitzer Prize Finalist in Biography; Andrew Carnegie, a New York Times Notable Book of the Year, the recipient of the New York Historical Society’s American History Book prize, and a 2007 Pulitzer Prize Finalist in Biography; and The Chief, which was awarded the Bancroft Prize for History and the J. Anthony Lukas Book Prize for Nonfiction.

He is a past president of the Society of American Historians, and until 2019 served as the Arthur M. Schlesinger, Jr. Professor of History at the CUNY Graduate Center.

David earned his B.A. from Bucknell University and his Ph.D. from Columbia University.

On this episode, David shares his one way ticket to New York City on July 18, 1945. He also shares several thoughts from his latest book, The Last Million: Europe’s Displaced Persons from World War to Cold War.

The Patriarch: The Remarkable Life and Turbulent Times of Joseph P. Kennedy

The Chief: The Life of William Randolph Hearst