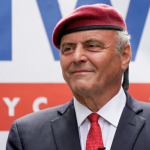 Born in 1954 in Canarsie, Brooklyn to a Catholic family of Polish and Italian descent, Curtis opened the first recycling center in Brooklyn when he was 14. Known as the teenage “neighborhood junk collector”, he collected empty cans, glass bottles, newspapers, and scrap metal, storing them in his basement after preparing them for recycling.

At 15, while delivering newspapers, Curtis saved a family from their burning home. He made three trips into the burning building and saved six people’s lives. For his heroism, he was named Newspaper Boy of the Year by the Daily News and was honored at the White House for his act by President Nixon.

In the late 70’s, while working as a night manager at a McDonald’s in the Bronx, Curtis formed a group called the “Rock Brigade”. The goal was to clean up a neglected New York City.

To make up for a scarcity of police patrols, Curtis retooled the focus of the volunteer effort to fill the void in crime fighting and the group took to the subway. The 13-member, multi-racial team of volunteers became known as “The Magnificent Thirteen”. The group agreed to ride the subways between the toughest stops, without weapons, to help put a stop to the crimes occurring to citizens riding the subway system. These courageous volunteers would look for gang members who had been mugging straphangers in the subway and detain them for the police to arrest. Many times, simply their presence would act as a deterrent to illegal activity.

As word spread of “The Magnificent Thirteen” and their heroic deeds, more rushed to join the efforts. On February 13, 1979, Curtis created the “Guardian Angels”. Volunteers of all ages go through weeks-long rigorous training, in which they learn martial arts techniques in order to defend themselves, enforce discipline, and make legal citizens’ arrests, all without the use of weapons. Men and women in the “Guardian Angels” are recognizable in their bright red berets and military-like bomber jackets. These unarmed volunteers patrol the streets and subways, often in groups, keeping a watchful eye over the city.

Curtis began his media career in 1990, where he started as a radio broadcaster at WABC-AM. He hosted various radio programs on WABC, and in 2000, became the co-host of the long-running Curtis and Kuby in the morning.

In 1992, Curtis received the prestigious Courage of Conscience Award from the Peace Abbey at the John F. Kennedy Library in Boston for his work of establishing the “Guardian Angels” in major cities on every continent.

On this episode, Curtis shares his one way ticket to the “Theatre of the Mind”. He also shares his mayoral platform and life with his wife Nancy and their 16 rescue cats in a 328 sq. ft. Upper West Side apartment.