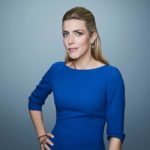 Clarissa Ward is CNN’s Chief International Correspondent. In her fifteen-year career with Fox, CBS, and ABC, Ward has reported from front lines across the world.

Clarissa graduated with distinction from Yale University, and in 2013 received an honorary doctor of letters degree from Middlebury College in Vermont. She lives in London.

On All Fronts: The Education of a Journalist

Austin Tice has been held captive in Syria since August 2012. Click here to learn more about Austin and how you can help.