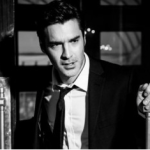 Born and raised in Athens, Greece, Christopher Papakaliatis is a highly acclaimed stage, film and television actor as well as a successful screenwriter and director.

He was first cast at age 16 for a role in the hit Greek TV drama “Guards of Ahaia”.

Following numerous roles in a string of successful TV series, at 23, Christopher wrote his first TV script, “Our Life is a Path” which was aired on Mega Channel during 1999-2000 to much critical acclaim. The following season he wrote and starred in the TV series “Take Care of Me”. That was followed by the TV movie “Three wishes”.

In 2003 Christopher wrote and starred in the TV series “Close Your Eyes” and directed most of the second and third seasons. The show was one of the highest rated in Greece. Two years later, he wrote, directed and starred in a new drama-thriller series “Two Days Only”, which was artistically acclaimed as one of the best filmed TV series. Christopher’s small screen credits also include directing and starring in the TV Series “4”.

In 2010, Christopher was accepted as a member of the International Academy of Television Arts and Sciences (EMMY International). Two years later, he starred opposite Catherine Deneuve and Sebastian Koch in the feature film “God Loves Caviar” directed by Iannis Smaragdis.

Christopher’s first feature film, “What If”, in which he wrote, directed and starred, is a love story set in Athens during the European economic crisis. It is now one of the biggest box office hits in Greece.

The multi-talented artist resides in Athens where he’s currently writing his next feature film.