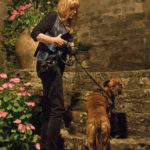 Chesher Cat began her creative adventures as a rock and roll photographer and journalist in Vancouver, B.C. shooting hundreds of concerts up and down the west coast, including groups such as Led Zepppelin, Elton John, the Eagles, George Harrison, and the Bee Gees, to name a few.

She relocated to Los Angeles with the idea to do a book featuring art by musicians, believing that a person with one creative talent could also be equally talented in another. The result was the coffee-table book Starart, showcasing the fine art of Joni Mitchell, John Mayall, Cat Stevens, Klaus Voormann, Commander Cody, and Ron Wood of the Rolling Stones. Starart debuted in 1980 to rave reviews and was featured in publications across the country, including Rolling Stone, People and Playboy. Chesher produced art gallery shows of original works from Starart, with gala openings attended by the artists in Los Angeles, New York, San Francisco and Laguna Beach.

She then fulfilled her dream to work in film, freelancing as a still photographer, designer and reader before accepting a staff position at Cannon Pictures as the Creative Director in advertising and marketing. Her efforts were instrumental in garnering millions of dollars in foreign and domestic feature and video revenues. She left Cannon to start her own design company, and while retaining them as a client, she also provided creative advertising services to 20th Century Fox, Warner Bros. and many independent production and distribution companies.

Chesher produced and starred in Final Placement at the Tiffany Theater in Los Angeles, raising thousands of dollars for the child abuse charity, Childhelp USA. She also produced and directed the filming of a Mick Fleetwood concert in Coachella, CA to be released worldwide on DVD.

She wrote her first screenplay in 2002 and has since optioned two screenplays. In 2007, Chesher returned to her rock and roll roots with the release of her coffee-table book Everybody I Shot Is Dead, honoring 48 musicians she photographed who have since passed away.

In 2012, Chesher made her directorial debut with a short film adapted from her feature script, End of the Innocents. She followed that with Chuck E.’s Too Big A Deal, an experimental/documentary/photo essay/music video on musician Chuck E. Weiss.

Chesher Cat spent the summer of 2016 shooting The Paris Project – resulting in a limited edition book. And in December 2016, she co-produced, shot, directed and edited Adrianna Mateo’s music video Coney Island. Chesher continues with her photography exploits on a daily basis, while also working on producing her coming-of-age feature film, My First Kiss, inspired by her own experiences in the wild and wonderful world of rock and roll.

Everybody I Shot Is Dead