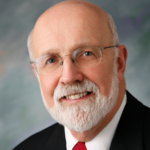 Charlie Clifford founded Tumi and served as CEO for many years before heading up the company’s international business. A true entrepreneur, Charlie launched Tumi with a partner in 1975 as an importer of leather bags from Colombia with a total investment of $10,000. Today, Tumi is widely considered to be the market leader in premium luggage, business cases, and related accessories. The brand is sold in over 70 countries and has a dedicated following among frequent travelers, including business executives and professionals, famous athletes, and celebrities from the sports and entertainment world. After going public in 2012, the company was purchased by Samsonite in 2016 for about $1.8 billion.

Clifford graduated from Indiana University in 1965 with a BA in English and earned his MBA in marketing from Indiana’s Kelley School of Business in 1967. He then spent two years in Peru as part of an experimental Peace Corps MBA program, working as a consultant with small businesses and assisting government agencies with economic development projects. In 1975, after working as a marketing director for an industrial equipment company, he started Tumi and named the company after a Peruvian Pre-Colombian god which was the symbol of the region where he lived while serving in the Peace Corps.

After retiring from Tumi in 2004, Clifford consulted with various companies in the leather goods sector as a principal at Compass Partners International, a management firm which partnered with international brands to develop their business in the U.S. market. Now, he serves as a founding partner of ROAM, a premium luggage brand with the thoughtful kind of design and premium materials on which Clifford insists for the brands he spearheads. What sets this new brand apart is a groundbreaking concept for the luggage industry. ROAM allows customers to uniquely express themselves by designing their own luxury luggage – from the color of the case itself, to wheels, trim and zippers, and each piece is then made-to-order in the U.S.A.

Charlie Clifford is a member of the President’s Circle at ACCION International and the Dean’s Council of the Kelley School of Business. Clifford also served on the Board of Directors for the Travel Goods Association from 1996 to 2003, and was formerly a Board Director at Aid to Artisans, a non-profit organization which helps artisans in developing countries access the U.S. market for their handcrafted products.

Charlie and Cricket (his wife of 50+ years) divide their time between their home on Cape Cod and an apartment in New York’s Greenwich Village. They have two grown children: Mark, who resides with his wife and two daughters on Cape Cod; and Tara, who lives with her husband and three children in Concord, MA.