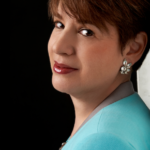 By day, Celia Berk is a corporate executive. She has spent over 20 years at WPP, the world’s largest marketing communications company. As Chief Employee Experience Officer, J. Walter Thompson, Celia reports to the CEO and focuses on ensuring the work lives of JWT employees are as rewarding as possible. As Group Talent Partner, WPP she reports to the company’s Chief Transformation Officer and works with over 50 global account teams to advance WPP’s strategic focus on “horizontality.”

But by night, Celia is an award-winning singer. She set out to have a life in the theatre, and returned to performing in 2009. She is the recipient of the 2017 BroadwayWorld Award for Best Female Vocalist and her highly anticipated second album, MANHATTAN SERENADE, won the 2017 LaMott Friedman Award. Of her extended run of shows at New York’s Metropolitan Room celebrating its release, Stephen Holden wrote in The New York Times, “Ms. Berk makes you feel about New York the same way a Cole Porter song makes you feel about Paris.” It received the 2016 BroadwayWorld Award for Best New York Cabaret Show, Female. Rex Reed calls Celia “One of the best singers I’ve heard in a long time” and Michael Feinstein says, “I so enjoy Celia’s beautiful vocal sound and style, and her taste in song choices.”

MANHATTAN SERENADE and YOU CAN’T RUSH SPRING are available at iTunes, Amazon, CDBaby.com, and Pandora.

Celia holds a Bachelor of Fine Arts from Hofstra University and serves on the school’s Women in Leadership initiative. She is on the Advisory Council of the National Executive Service Corps, and sits on the Global Advisory Board for the Future of Advertising Project at Wharton. She is a Trustee of the Nina Abrams Fund.