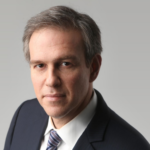 Bret Stephens is an Op-Ed Columnist and Associate Editor for the New York Times since 2017. Mr. Stephens began his newspaper career at the Wall Street Journal in 1998 as an editor in New York, and later wrote editorials and articles for the newspaper from Brussels. In January 2002, at age 28, he was named editor-in-chief of the Jerusalem Post at the height of the second intifada.

Mr. Stephens returned to the Wall Street Journal in late 2004 and reported from around the world and interviewed dozens of world leaders, including Presidents Bush, Obama, and Trump and every Israeli Prime Minister since Shimon Peres. In June 2017 he added senior political analyst for NBC to his portfolio.

He is the recipient of the 2013 Pulitzer Prize for distinguished commentary, awarded to him “for his incisive columns on American foreign policy and domestic politics, often enlivened by a contrarian twist.”

His essays and articles have appeared in Foreign Affairs, Commentary magazine and many other publications. He is a frequent guest on RealTime With Bill Maher, Morning Joe, Hardball and many other news and talk shows.

Mr. Stephens has twice been chairman of Pulitzer Prize juries and is a national judge of the Livingston Awards for young journalists. He holds three honorary doctorates, most recently from Yeshiva University, and many other distinctions from organizations dedicated to promoting the values of liberal democracy in the face of rising populism and authoritarianism.

He is the author of “America In Retreat: The New Isolationism and the Coming Global Disorder,” which was published in 2014 to wide acclaim.

Mr. Stephens is a widely acclaimed public speaker. In 2017 he delivered the Daniel Pearl Memorial Lecture at UCLA, later republished in Time magazine and read by over two million people.

Mr. Stephens was born in New York and raised in Mexico City. He holds a Bachelor of Arts with honors from the University of Chicago and a Master’s of Science from the London School of Economics. He is married to Corinna da Fonseca-Wollheim, a classical music and opera critic for the New York Times. They live in New York City with their three children.