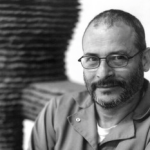 Born in Israel in 1951, Boaz Vaadia is an internationally known sculptor who works primarily in stone and bronze. Vaadia moved to New York in 1975 and his studio is located in Williamsburg Brooklyn.

Growing up on a farm in Gat Rimon, Israel, Boaz Vaadia was inspired by the nature around him. Vaadia says of his sculpture, “I work with nature as an equal partner, that’s still the strongest thing I deal with today, that primal connection of man to earth. It’s in the materials I use, the environments I make and the way I work.”

Vaadia hand-carves slices of slate and bluestone, shaping them to be layers in a kind of topographical map. He stacks the horizontal slabs until the graded silhouette of a person, animal or group emerges. He views the geological layering of the stone as a natural model for his own sculptural process. It seems a logical metaphor for our human layering of experience and memory.

Vaadia continues the process by casting select pieces in bronze, creating a limited edition. Paired with his sculptures are glacial boulders which function visually as counterpoints to the figures. His work appears as though created by natural forces, such as wind and water; they look simultaneously ancient and futuristic, as if the workmanship forms a bridge from the Stone Age to the digital age.