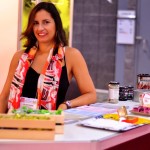 The sap from evergreen bushes found on the Greek island of Chios is known as “mastiha” and has been used since ancient times for numerous purposes, from medicine to cooking.

With both parents hailing from Chios, Artemis has spent every summer on the island surrounded by mastiha. Coming from a lineage of mastiha growers, she was always passionate about the sap and its healing qualities. Artemis felt it her ancestral calling to be a mastiha advocate.

In 2006, Artemis and her sister became partners in the Mastihashop on Mykonos and in December 2007 opened the first Mastihashop in the Americas, a lifestyle boutique on the Lower East Side of New York City where a variety of mastiha products can be found.

Mastihashop has received recognition from from the New York Times and Vogue, and won the British Airways Face of Opportunity contest for small businesses in 2011.

Artemis earned her BS from Lafayette College and an MA from New York University, both in psychology. She is a licensed mental health counselor, and worked with children and families affected by 9/11 at P.S. 150 in Tribeca.