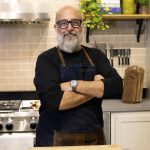 Andrew Zimmern is an Emmy-winning and four-time James Beard Award-winning TV personality, chef, writer and social justice advocate. As the creator, executive producer and host of Travel Channel’s Bizarre Foods franchise, Andrew Zimmern’s Driven by Food and Emmy-winning The Zimmern List, he has devoted his life to exploring and promoting cultural acceptance, tolerance and understanding through food.

In 2020, Andrew returned to television with his MSNBC series What’s Eating America, and in 2021, he premiered Family Dinner on Chip & Joanna Gaines’ Magnolia Network. In 2022, Andrew Zimmern’s Wild Game Kitchen will premiere on the Outdoor Channel. All three shows were created by Intuitive Content, the full-service television and digital production company that Andrew heads as both founder and CEO. In 2021, Intuitive Content was named one of the top 100 production companies in the world by Realscreen.

Andrew is also the founder and CEO of Passport Hospitality, a restaurant and food service development company. He is passionate about his philanthropic endeavors and sits on the board of directors of Services for the Under Served, Project Explorer/EXPLR, Charlize Theron Africa Outreach Project and Soigne Hospitality. He serves on City Harvest’s Food Council, is the International Rescue Committee’s Voice for Nutrition and a Goodwill Ambassador for the United Nations World Food Programme. Andrew is also a founding member of the Independent Restaurant Coalition, fighting to save restaurants affected by Covid-19.

He resides in Minneapolis.

On this episode, Andrew shares his one way ticket to Samoa. In the course of the conversation, he highlights its food (including the “sweetest most amazing banana you’ve ever had”), its stunning beaches, colorful markets, and general relaxed atmosphere, which all point to him believing he was a Samoan in a previous life.

Plus, Andrew spotlights some of his more memorable food experiences around the world (he’s been to 176 countries!), including the souks in Aleppo and Fez and in Taiwan which he says is “the most underrated food destination on planet earth”.

Click here to subscribe to Andrew’s “Spilled Milk” where he goes in-depth each week on food, his world travels, and stories you’re not going to believe.