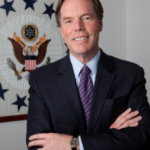 Ambassador Nicholas Burns (Ret.) is the Roy and Barbara Goodman Family Professor of the Practice of Diplomacy and International Relations at the Harvard Kennedy School of Government. He is the Faculty Director of the Future of Diplomacy Project and Faculty Chair of the programs on the Middle East and South Asia. He is Director of the Aspen Strategy Group and a Senior Counselor at the Cohen Group.

From 2014 to 2016, Burns was a member of Secretary of State John Kerry’s Foreign Affairs Policy Board at the U.S. Department of State. He served in the United States Foreign Service for twenty-seven years until his retirement in April 2008.

Burns was Under Secretary of State for Political Affairs from 2005 to 2008. Prior to that, he was Ambassador to NATO (2001-2005), Ambassador to Greece (1997-2001), and State Department Spokesman (1995-1997). He worked on the National Security council staff where he was Senior Director for Russia, Ukraine and Eurasia Affairs and Special Assistant to President Clinton and, before that, Director for Soviet Affairs for President George H.W. Bush. Earlier in his career, he worked at the American Consulate General in Jerusalem and in the American Embassies in Egypt and Mauritania. He serves on the Board of several corporate and non-profit organizations.