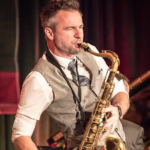 Adrian Cunningham is an award-winning multi-instrumentalist, vocalist and world traveler. Originally from Sydney, Australia and now based in New York, Adrian is providing to be one of his country’s top exports. With fluent command of the saxophones, clarinet, and flute, he is one of the finest multi-instrumentalists in jazz today. Adrian is the recipient of the Hot House Saxophone Award for 2017. Adrian’s band, Professor Cunningham and His Old School, is the winner of international band competition World Jam (Madrid: 2016, 2017) and Best Band Award at 2017 Harlem Festival (Vilnius, Lithuania). When he is not busy performing in New York with some of its finest players, he is touring the world playing jazz festivals and swing events.

Since relocating to New York City in 2008, Adrian has performed at some of the Big Apples’ finest clubs, including The Blue Note, Smalls, Birdland, 55 Bar, Apollo Theatre, Fat Cat, Dizzy’s at Jazz at Lincoln Center and even an event at the hallowed Village Vanguard. He has played with such jazz stars as Wynton Marsalis, Wycliffe Gordon, Jon Batiste, George Coleman Jr., Jeff Hamilton, John Clayton, Ted Rosenthal, Chris Potter and Rene Marie.

Adrian is currently performing with world-class trombonist Wycliffe Gordon, including a performance at the London Jazz Festival and a recording in Abbey Road Studios alongside Wess Anderson, Reginald Veal and Herlin Riley. Adrain’s travels with the Wycliffe Gordon quintet have also included appearances at the Johannesburg Jazz Festival, Bern Jazz Festival (Switzerland), Newport Jazz Festival and regular performances in New York at Dizzy’s at Jazz at Lincoln Center. Adrian has also appeared on two of Wycliffe’s albums to rave reviews (“One of the unexpected joys [of the album] is the rich, woody clarinet of Cunningham,” Hot House NYC).

From 2014 to 2017, Adrian was the leader of the saxophone section of the Grammy-winning Vince Giordano and the Nighthawks, a NYC-based 1920s swing orchestra responsible for the soundtracks for “Boardwalk Empire” and movies including The Aviator.

As a leader, he has recorded CDs and two DVDs both in Australia with his quartet and also in New York through Arbor Records. His 2017 release Jazz Speak, recorded with jazz stars Jeff Hamilton, John Clayton and Ted Rosenthal, broke the top 20 in the U.S. national JazzWeek charts. His new CD, Adrian Cunningham & His Friends Play Lerner & Loewe – which explores the jazz influence of the legendary songwriting team known for iconic musicals like My Fair Lady, Camelot and Brigadoon – features Fred Hersch on piano, John Hebert on bass and Eric McPherson on drums, with guest stars Randy Brecker on trumpet and Wycliffe Gordon on trombone.

On this episode, Adrian shares his one way ticket to Barcelona. Plus, he talks about the influence of the legendary songwriting team, Lerner & Loewe, known for iconic musicals like My Fair Lady, Camelot and Brigadoon. We also play several tunes off the album: Adrian Cunningham & His Friends Play Lerner & Loewe.