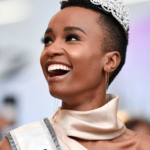 Zozibini Tunzi is Miss Universe 2019. Affectionately known as Zozi, she had previously been crowned Miss South Africa 2019, and is the third woman from her country to hold the Miss Universe title. Born in Tsolo, Eastern Cape and raised in the nearby village of Sidwadweni, Zozi is one of four sisters. She later moved to Cape Town and attended Cape Peninsula University of Technology. In 2019, she graduated with a National Diploma in public relations management. She had also worked as a model in East London, Eastern Cape.

Prior to winning Miss South Africa, Zozi was completing a Bachelor of Technology graduate degree in public relations management at Cape Peninsula University of Technology and worked as a graduate intern in public relations at Ogilvy Cape Town. Zozibini Tunzi is a passionate activist and engaged in the fight against gender based violence She has devoted her social media campaign to changing the narrative around gender stereotypes. She is a proud advocate for natural beauty and encourages women to love themselves the way they are.